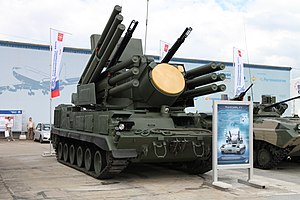 “(Reuters) – Moscow is sending an advanced anti-aircraft missile system to Syria, two Western officials and a Russian source said, as part of what the West believes is stepped-up military support for embattled President Bashar al-Assad.”

“The Western officials said the SA-22 system would be operated by Russian troops, rather than Syrians.”

This puts Russian military personnel right in the line of fire if Israel decides to attack a weapons transfer.

“However, the dispatch of advanced anti-aircraft missiles would appear to undermine that justification, since neither Islamic State nor any other Syrian rebel group possesses any aircraft.”

This means these weapons are intended to deter Israeli attack.

“An ally of Damascus since the Cold War, Moscow maintains its only Mediterranean naval base at Tartous on the Syrian coast, and protecting it would be a strategic objective.”

Might explain why the Russians are heavily invested, even as the cost grows. Still, it seems the costs would be less if they just found an alternate location in the region.

“In the Middle East you never know what will happen. If the Russians end up handing it (SA-22) over to the Syrian military I don’t think the Israelis would intervene but they would go bananas if they see it heading towards Hezbollah in Lebanon,” the diplomatic source said.”

This is the intent. The Russians are betting the Israelis won’t attack simply because they are present. Dangerous bet. Why else are these weapons sent if not to prevent Israeli air attack?

“An Israeli military spokesman declined to comment on the missile system. A senior Israeli defense official briefing reporters on Thursday said Israel was in contact with Moscow and would continue its policy of stopping advanced weapons reaching Hezbollah.”

This signals the Israeli intent to call Putin’s bluff.

Another thought, The US has reduced anti-air protection (see also Jordan) while the Russians are adding anti-air protection. Also less US Navy carrier presence.  You see how the balance is shifting? If I was a US ally in the region right now I would be freaking out.

“Iran this week sent its first ground troops to Syria, around 1,000 marines and elite troops of the Iranian Revolutionary Guards Corps (IRGC). They moved straight into Ghorin, a small military air facility just south of the port town of Latakia, and hooked up with the just-landed Russian marines at Jablah. Three weeks ago, DEBKA file began reporting on Russian-Iranian military intervention afoot for saving the Syrian ruler Bashar Assad, followed on September 1 by the first disclosure of the Russian buildup in Syria.
Our military sources report now that Moscow is about to send a shipment of advanced S-300 air defense missile systems for deployment at Jablah, the base the Russians have built outside Latakia for the intake of the Russian troops. The S-300 systems will also shield the Iranian facility at Ghorin.
Jablah has been converted into a busy depot for the Russian troops still arriving in Syria, combatants from units of Marine Brigades 810 and 336.

Russian MiG-31 interceptor craft standing by at the Mezza airbase at Damascus airport offer the combined Russian-Iranian force air cover. To the west, the giant Dmitri Donskoy TK-20 nuclear submarine is on its way to Syrian waters. Latakia is therefore fast growing into a powerful Russian-Iranian military enclave, able to accommodate Assad and top regime officials if they are forced to leave Damascus.
According to our military sources, it is too soon to determine the exact function of this enclave, whether defensive or, after settling in, the Russian and/or the Iranian forces are planning to go after Syrian rebel and Islamic State forces making gains in northern Syria.

There is no evidence to bear out the curious briefing high-ranking defense sources gave Israeli military correspondents Thursday that the incoming Iranian troops have come to beef up the large-scale Syrian army-Hizballah units, who have been unsuccessfully battering away at the rebel fighters holding the key town of Zabadani for nearly two months. Our sources find the Iranian and Russian units fully occupied for now in expanding and outfitting their new quarters at Ghorin and Jablah.”

“The fact that Iran, Hezbollah, and Russia are willing to escalate conflict by entering ground forces and increasing arms shipments means that Assad’s position in power is assured for the near future.”

Intelligence chief: Iraq and Syria may not survive as states

“Iraq and Syria may have been permanently torn asunder by war and sectarian tensions, the head of the Defense Intelligence Agency said Thursday in a frank assessment that is at odds with Obama administration policy.

“I’m having a tough time seeing it come back together,” Lt. Gen. Vincent Stewart told an industry conference, speaking of Iraq and Syria, both of which have seen large chunks territory seized by the Islamic State.

On Iraq, Stewart said he is “wrestling with the idea that the Kurds will come back to a central government of Iraq,” suggesting he believed it was unlikely. On Syria, he added: “I can see a time in the future where Syria is fractured into two or three parts.”

“Israel Aerospace Industries (IAI) has developed a “revolutionary” self-protection system for aircraft that for the first time provides pilots with accurate and actionable warnings of land- and sea-based threats, IHS Jane’s was told on 6 September.”

“As a pilot, RWR would frighten you as the information was approximate and non-actionable. [In contrast] RWL relaxes you, as you know precisely where the threat is coming from and can do something about it,” said Navon.”

“IAF working to double range for the stealth jet; first planes to arrive in December 2016.”

Will Israel wait to do anything before these are operational? I think not.

US, Israel weeks away from co-production deal for ‘David’s Sling’ air defense system

“The United States and Israel are weeks away from reaching a draft agreement on a co-production of Israel’s air defense system called David’s Sling that the two countries jointly developed, the top US missile defense officer told lawmakers on Thursday.”

They better step it up!